WHERE TECHNOLOGY AND FAITH CONNECT IN DFW

Our 2020 DFW Technology Prayer Breakfast will be back October 2nd at the Irving Convention Center, from 6:30 – 9:30 am. Sign up today to volunteer, sponsor, or host a table. We’re accepting nominations to the Merv Tarde Values in Leadership Circle.  We have other events leading up to our annual event that we post on our event page, so you can keep up with us leading up to the big day.

What is the DFW Prayer Breakfast?

The Dallas/Fort Worth Technology Prayer Breakfast was created to connect the Technology Leaders in North Texas to the convictions and passions they share with so many others here in the Metroplex.  It’s also a time that we can share our faith with coworkers by inviting them to come and enjoy a great breakfast and the speaker we have handpicked for this day.  We are a volunteer led organization.  Steve Helms is our Committee President and he is leading the effort to build our team to reach more people each year. Sign up to Volunteer and help make this year’s event our best one ever.

Our 2019 Keynote Speaker Was Sanjay Poonen 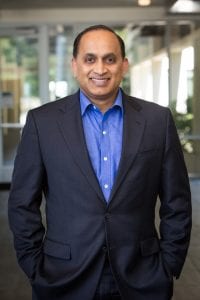 Previously, Sanjay held the role of executive vice president and general manager for the End-User Computing business unit at VMware. In this role, he was responsible for strategy, products, engineering, marketing, and sales across all of VMware’s End-User Computing offerings.

Before VMware, Sanjay was president and corporate officer of Platform Solutions and the Mobile Division at SAP AG. During his more than seven years at SAP, Sanjay held several executive-level roles in product development and sales, including leading SAP’s Analytics, Big Data, Mobile and all Industry Business Units, driving many solutions to industry-leading market positions.

Prior to SAP, Sanjay held executive roles at Symantec, VERITAS, and Informatica, and he began his career as a software engineer at Microsoft, followed by Apple.

2018 – Our speaker was Cheryl Bachelder, the former CEO of Popeyes Louisiana Kitchen. Rusty Kennington, Eric Wilson, and Robert Hunt were inducted into the Merv Tarde Values in Leadership Circle.

2016 – We had over 700 people in attendance to hear Pat Gelsinger, CEO of VM Ware, share how he lives out his faith in his personal and professional life.  We added Mark A. Stone, CIO for the Texas A&M University System, as the 2017 Merv Tarde Values in Leadership Circle.

2015 – Our guest speakers were Todd Stewart of Gulf Wind International and Gary Peek of Rent-A-Center and we more than doubled our attendance from 2014 to see almost 500 people in attendance. Jeff Blackwell and Phil Farr were our first two inductees into the Merv Tarde Values in Leadership Circle.

2014 – Our inaugural event held at the Irving Convention Center. Our guest speakers were Don Cosbie, President of SSIClaimsnet, and Steve Reiter, Executive VP and Chief Revenue Officer for entegra Technologies. We were excited to see over 200 people join us for our first event and excited to see where GOD will take the event in the future.